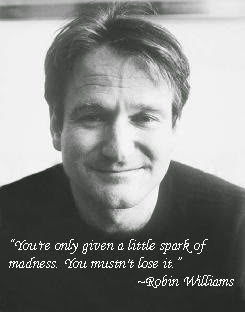 From comedy to drama, Robin Williams excelled on giving us either the laughter of a lifetime or one of the best tear jerking moments through his acts or movies. As a tribute to my late comedy IDOL who passed away on August 11, 2014. I would like to share some movies which were branded top 10.

I see his presence in this world as a gift, he bestowed upon us a the gift of laughter; it is ironic that he who endures severe depression provides so much joy to the majority of people around him. If laughter is the best medicine, then indeed, Robin Williams was the doctor who can prescribe the best pill of laughter and a syrup of relief.

1. The World According to Garp (1982) – Based on the John Irving novel, this film chronicles the life of T S Garp, and his mother, Jenny. Whilst Garp sees himself as a “serious” writer, Jenny writes a feminist manifesto at an opportune time, and finds herself as a magnet for all manner of distressed women. (136 mins)

3. Dead Poets Society (1989) – Robin Williams in this movie played the role of John Keating an English teacher who inspires his students to a love of poetry and to seize the day. (128 mins)

4. Good Morning Vietnam (1987) – An unorthodox and irreverent DJ begins to shake up things when he is assigned to the US Armed Services Radio station in Vietnam. (121 mins.)

5. Awakenings (1990) – In the movie Robin Williams played a dedicated and caring physician at a local hospital. The movie is loosely based on a true story of a British neurologist Oliver sacks, played by Robin Williams as doctor Malcolm Sayer, who survived the 1917-1928 epidemic of encephalitis lethargic. (121 mins)

6. The Fisher King (1991) – In the movie Robin Williams plays a character of a deluded homeless man, who is on a mission to find the Holy Grail. The Fisher King is a movie about a radio shock jock who tries to find redemption by helping a man whose life he inadvertently shattered. For this movie Robin Williams got nominated as best actor for the Academy Award while he won a Golden Globe Award. (137 mins)

7. Hook (1991) – Robin Williams played the character of a successful lawyer Peter Banning, whose relationship with his two kids is strained due to his continuous absences and broken promises. The movie is an adventurous fantasy film directed by Steven Spielberg and also starred Dustin Hoffman and Julia Roberts. The film acts as a sequel to J. M. Barrie’s novel Peter and Wendy, focusing on a grown-up Peter Pan who has forgotten his childhood. (144 mins)

8. Mrs. Doubtfire (1993) – Robin Willaims not only featured in the movie but also co produced the movie. The movie was based on the novel Alian Madame Doubtfire by Anne Fine. The film was a huge box office success. The movie also returned with a sequel starring the same cast. However Robin Williams was allegedly unhappy with the plot of the sequel. (125 mins)

9. Alladin (1992) – Aladdin is a musical fantasy movie where Robin Williams played a comedic genie, with unstoppable powers that can only be exercised when his master wishes it. The movie also made headlines for Robin and his conflict with the studio as he voiced the Genie for SAG (Annual Salary for a Screen Actor ) scale pay ($75,000), on a condition that his name or image would not be used for any marketing.